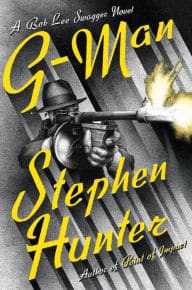 Stephen Hunter’s G-Man is the Hot Book of the Week at The Poisoned Pen. He’s going to be here on Thursday, June 8 at 7 PM. We can summarize the book for you.

1934. The depths of the Depression were marked by an epidemic of bank robberies and the swashbuckling, Tommy-gun-toting outlaws who became household names. John Dillinger. Bonnie and Clyde. Pretty Boy Floyd. Hunting them down was the new U.S. Division of Investigation—soon to become the FBI—which was determined to nab the most dangerous gangster this country has ever produced, a man so violent he scared Al Capone and was booted from the Chicago Mob—Lester Gillis, better known as Baby Face Nelson. To stop him, the Bureau recruited the most talented gunman of the time—Charles Swagger, World War I hero and sheriff of Polk County, Arkansas.

Eighty years later, Charles’s grandson Bob Lee Swagger has finally decided to sell the family homestead, but when the developers begin to tear down the house, they uncover a strongbox hidden in the foundation. Enclosed is an array of memorabilia dating back to 1934—a much-corroded federal lawman’s badge, a .45 automatic preserved in cosmoline, a mysterious gun part, and a cryptic diagram—all belonging to Charles Swagger. Fascinated and puzzled by these newly discovered artifacts, Bob is determined to find out what happened to his grandfather, who died before Bob was born, and why his own father, whom he worshipped, never spoke of Charles. But as he investigates further, Bob learns that someone is following him, that someone is sharing his obsession with finding out what Charles Swagger really left behind.

Alternating between Bob’s present-day search to uncover his grandfather’s legacy and Charles’s relentless pursuit for the nation’s most notorious outlaw in the Midwest of the 1930s, G-Man is a thrilling, action-packed addition to Stephen Hunter’s bestselling Bob Lee Swagger series.

Even better, though, you can listen to Stephen Hunter talk about G-Man. Here’s the link to a recent interview on Down Range TV. https://bit.ly/2snEpoC

Tomorrow, you can read Robert Anglen’s review of the book before the bookstore appearance. And, of course, we have signed copies of the book that you can order. https://bit.ly/2syPbYx