Well, not really Lyndsay Faye, and, not really Broadway.  But, Lyndsay Faye’s debut novel, Dust and Shadow will be a one night only concert at the Highline Ballroom in New York City. 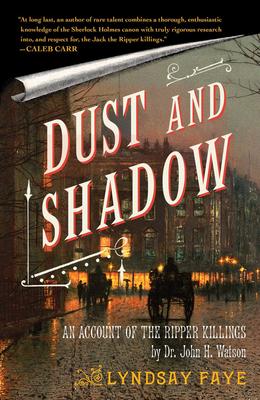 “Dust and Shadow,” based on the novel by Lyndsay Faye, tells the story of the Jack the Ripper killings, through the eyes of Watson, and pins Sherlock Holmes against the infamous Jack the Ripper.

Curious, but you’re not going to be in New York City on July 17? You can order a copy of Dust and Shadow through the Web Store. https://bit.ly/2phzqTx

Here’s the summary of the book:

From the gritty streets of nineteenth century London, the loyal and courageous Dr. Watson offers a tale unearthed after generations of lore: the harrowing story of Sherlock Holmes’s attempt to hunt down Jack the Ripper.

As England’s greatest specialist in criminal detection, Sherlock Holmes is unwavering in his quest to capture the killer responsible for terrifying London’s East End. He hires an “unfortunate” known as Mary Ann Monk, the friend of a fellow streetwalker who was one of the Ripper’s earliest victims; and he relies heavily on the steadfast and devoted Dr. John H. Watson. When Holmes himself is wounded in Whitechapel during an attempt to catch the savage monster, the popular press launches an investigation of its own, questioning the great detective’s role in the very crimes he is so fervently struggling to prevent. Stripped of his credibility, Holmes is left with no choice but to break every rule in the desperate race to find the madman known as “the Knife” before it is too late.

A masterly re-creation of history’s most diabolical villain, Lyndsay Faye’s debut brings unparalleled authenticity to the atmosphere of Whitechapel and London in the fledgling days of tabloid journalism and recalls the ideals evinced by Sir Arthur Conan Doyle’s most beloved and world-renowned characters. Jack the Ripper’s identity, still hotly debated around the world more than a century after his crimes were committed, remains a mystery ripe for speculation. Dust and Shadow explores the terrifying prospect of tracking a serial killer without the advantage of modern forensics, and the result is a lightning-paced novel brimming with historical detail that will keep you on the edge of your seat.