Margot Lee Shetterly, author of Hidden Figures, will be appearing in Phoenix on April 4. Here’s the information. 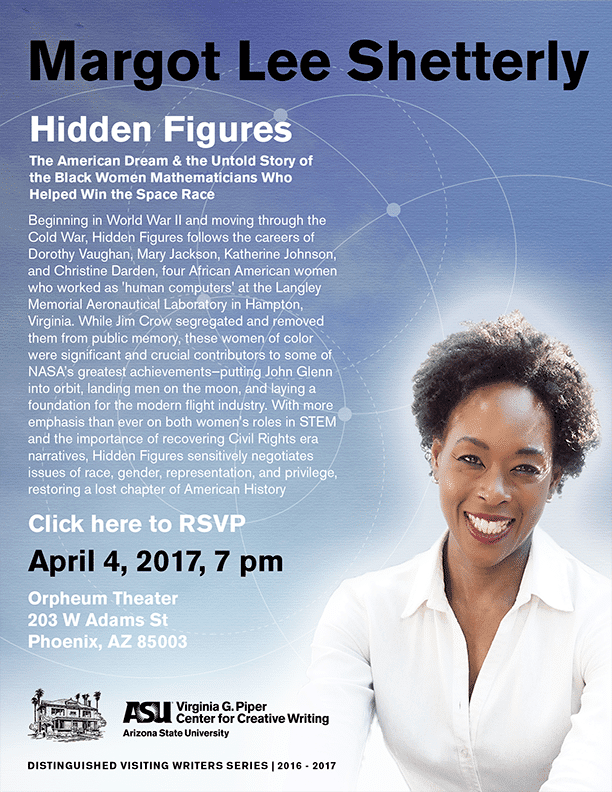 You do need to RSVP to get a seat, although it’s free. It’s through Eventbrite. https://bit.ly/2nkl6JK

Here’s more information from that site.

DESCRIPTION
Join the Virginia G. Piper Center for Creative Writing as we present author Margot Lee Shetterly for a look behind her debut book Hidden Figures: The American Dream and the Untold Story of the Black Women Mathematicians Who Helped Win the Space Race on Tuesday, April 4th, 2017 at the Orpheum Theater (203 W Adams St, Phoenix, AZ 85003) at 7:00 pm. Margot will take questions from the audience and sign books after the presentation. While this event is open to the public and free, please note that seating is first-come, first-serve, and RSVP’s do not guarantee a seat. We will not be able to accomodate overflow seating.
Beginning in World War II and moving through the Cold War, Hidden Figures follows the careers of Dorothy Vaughan, Mary Jackson, Katherine Johnson, and Christine Darden, four African American women who worked as ‘human computers’ at the Langley Memorial Aeronautical Laboratory in Hampton, Virginia. While Jim Crow segregated and removed them from public memory, these women of color were significant and crucial contributors to some of NASA’s greatest achievements—putting John Glenn into orbit, landing men on the moon, and laying a foundation for the modern flight industry. With more emphasis than ever on both women’s roles in STEM and the importance of recovering Civil Rights era narratives, Hidden Figures sensitively negotiates issues of race, gender, representation, and privilege, restoring a lost chapter of American History
Hidden Figures has also been adapted into a major motion picture by 20th Century Fox starring Taraji P. Henson, Octavia Spencer, Janelle MonÃ¡e, Kirsten Dunst, Mahershala Ali, and Kevin Costner, released in theaters on January 6.

About the Author
Margot Lee Shetterly is an entrepreneur, writer and researcher whose debut book is Hidden Figures: The American Dream and the Untold Story of the Black Women Mathematicians Who Helped Win the Space Race (William Morrow/HarperCollins). A 2014 Alfred P. Sloan Foundation Fellow, she is also the founder of the digital archive The Human Computer Project and the co-founder of the magazine Inside Mexico. For more information, visit her website at https://margotleeshetterly.com.