Clare Mackintosh’ I See You really isn’t released until February 21. And, The Poisoned Pen won’t release signed copies until that date. 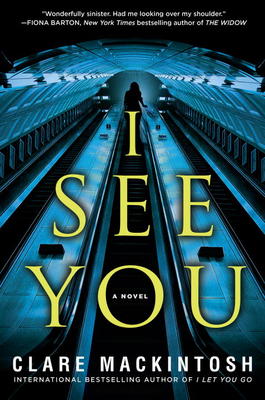 But, almost a month ahead of time, an audience at The Poisoned Pen was lucky enough to meet the author, and hear Barbara Peters, owner of the bookstore, interview her. And, you can watch that event now, via Livestream. https://livestream.com/poisonedpen/events/6902722

Here’s the summary of the book from the Web Page.

Every morning and evening, Zoe Walker takes the same route to the train station, waits at a certain place on the platform, finds her favorite spot in the car, never suspecting that someone is watching her…

It all starts with a classified ad. During her commute home one night, while glancing through her local paper, Zoe sees her own face staring back at her; a grainy photo along with a phone number and a listing for a website called FindTheOne.com.

Other women begin appearing in the same ad, a different one every day, and Zoe realizes they’ve become the victims of increasingly violent crimes—including murder. With the help of a determined cop, she uncovers the ad’s twisted purpose…A discovery that turns her paranoia into full-blown panic. Zoe is sure that someone close to her has set her up as the next target.

And now that man on the train—the one smiling at Zoe from across the car—could be more than just a friendly stranger. He could be someone who has deliberately chosen her and is ready to make his next move…”

Enjoy watching the Livestream event. Then, if you’re interested, order a signed copy of I See You through the Web Store. https://bit.ly/2jnJrPA They’ll be sent out after the release date of Feb. 21.