Donis Casey’s latest Alafair Tucker mystery is The Return of the Raven Mocker. Donis will be at The Poisoned Pen on Tuesday, Jan. 24 at 7 PM to discuss and sign the book. 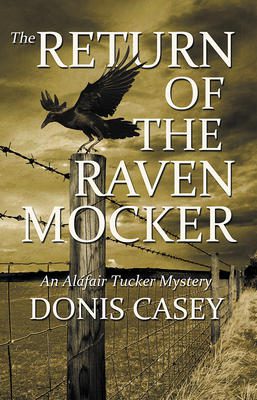 Michael Barson recently did a Q & A with Donis. It’s fun to read, so I hope you enjoy it.

1)  Return of the Raven Mocker is the ninth entry in your series featuring the indomitable Alafair Tucker of Boynton, Oklahoma and mother of ten (!). Did setting the story in 1918, at the height of the influenza pandemic that was running rampant in both Europe and the U.S., present any special research challenges?

Donis– Since my series is historical, I always do a lot of research before I start a novel. When I was writing my first Alafair Tucker Mystery, The Old Buzzard Had It Coming, I was particularly concerned with the kind of life Alafair would have led in 1912, so much of my research consisted of  personal interviews with people who had grown up on substance farms, and lots of library time reading diaries and other personal accounts.

The passing years have made quite a difference, both for Alafair and for me. The outside world has intruded on Alafair in a big way, and my research methods have changed as well. The internet has exploded. I don’t have to rummage around in the dusty library stacks (even though I still do. Not everything is online, especially diaries.)

The official websites of the Cherokee Nation is where I learned the details of the Cherokee legend of Raven Mocker, an evil witch/wizard who takes the form of a raven at night and flies about looking for the old and the sick to torment and suck the life out of them. This, I thought, is the perfect theme to weave into a book about the flu epidemic of 1918. And a good title, too.

I learned from the websites for the U.S. Department of Health and Human Services that no one knows for sure how many died in the flu pandemic, but modern estimates put the number at somewhere between thirty and fifty million people worldwide. The U.S. Center for Disease Control estimates that more than six hundred thousand of those were Americans. In May of 2015, The U.S. Department of Veterans Affairs listed just over 53,000 American battle deaths in World War I, which means that twelve times as many Americans died from complications of the flu than died in battle. I found most of my information about the desperate attempts of the medical establishment to find a cure, or at least an effective treatment for the disease, from a fabulous book by John Barry called The Great Influenza. Some of the cures doctors tried made things worse than they were.

One of my favorite research resources for any of my books is newspapers. In fact, for many years I have kept a file of interesting newspaper clippings for inspiration. I used to travel to libraries and read old newspaper archives on rolls of microfilm. Now I can find most early 20th Century newspapers online, including the Boynton Index. I am able find out about the weather for whatever day I want, and what was showing at the movies. I can learn the price of a bushel of wheat, a barrel of oil, a lady’s hat, and an automobile. Most importantly, I discover from letters to the editor and editorials what people were thinking about. It’s fascinating to see what people knew and when they knew it.

From the perspective of 100 years on, we know how things turned out. But they had no idea what was going to happen. During the horrible flu pandemic of 1918, the government actually encouraged news outlets to downplay the seriousness of the situation, because the first World War was still going on and nothing was to be allowed to interfere with war production! Eventually, factories all over the United States were no longer able to stay open because most of their workers were ill, and the stories in the papers began to change radically, printing all kinds of weird and generally useless advice about how to avoid becoming sick.

A few years ago, one of my cousins gave me a subscription to the Haskell News, a weekly paper from a little town near Boynton, in the same county. The News tells about the school lunch menu and such, but there is a historian who writes occasional priceless articles on local history for the paper. Many months ago he wrote a full page article on the effect of the 1918 flu epidemic on Muskogee County. Solid gold.

2) Is it fair to say that the mystery element of Raven Mocker takes a back seat to the vivid presentation you make of the influenza calamity that affected small communities like yours in Boynton, OK? It feels like the true villain of this piece is actually the pandemic itself.

Donis– I think that’s fair. Alafair is a farm wife with a very large family who lives in rural Oklahoma at the turn of the 20th century. She knows her world and has made her place in it. Each of the books in the series features a different one of Alafair’s children, with whom Alafair either works to solve a crime, or works to save from him or herself.  Since each child has his or her own distinct personality and interests, this gives me a great deal of latitude to explore all kinds of things that people were into in the early 20th Century.

For each book I must come up with a compelling reason for a farm wife and mother of ten to get involved in a murder investigation. It’s not like Alafair is looking for something to do. I also have to figure out a convincing way for her to either solve the murder or contribute substantially to the solution.

When I first began writing the Alafair Tucker Mystery series in 2003, I had a story arc in mind that was going to carry through ten books. This is a wonderful idea, but as anyone who has ever written a long series knows, after a couple of books all your plans for a story arc have been knocked into a cocked hat. The reason this happened, at least to me, is that I seem to be writing about real people who have their own ideas about how things should be gone about, and once I put them into a situation, they react to it in ways I had never anticipated. Besides, I really want readers to be able to pick up any book in the series and have a satisfying experience without having to know anything about what went before.

This poses the million dollar question for the author of a long series: How do you keep it fresh? How do you make every story stand alone, yet in its place as well? I have found over the course of nine books in the same series that I have begun to depart from the usual mystery novel format. The later books are constructed more like thrillers than puzzles.

3) No doubt you often receive feedback from your readers as your series develops from book to book. Have you ever been struck by a comment to the extent that you incorporated the idea into a subsequent book?

Donis– The comments I get from readers often have to do with their own memories or stories they’ve heard about life in a large family or on a farm. I’ve used many delightful pieces of information from readers to bring Alafair’s world to life. Children carving their names into ice-covered window panes, boating down a rain flooded gully in a washtub, throwing hard-boiled eggs at a fence post, using kerosene-soaked corncobs to start a coal fire.

In The Return of the Raven Mocker, I used a story that I heard from a friend many years ago about the curative power of onion. When my friend was a young boy, he developed such a severe case of pneumonia that the doctor told his mother to prepare herself for his imminent demise. In an act of desperation, his mother sliced up a raw onion and bound it to the bottoms of his feet with strips of sheet, then put cotton socks on him. In the morning, his fever had broken, his lungs had cleared, and the onion poultice had turned black. Did the onions save his life? For my purposes, they did.

The Web Store has signed copies of The Return of the Raven Mocker is you’d like to catch up with Alafair Tucker and her family. https://bit.ly/2iZRxvu