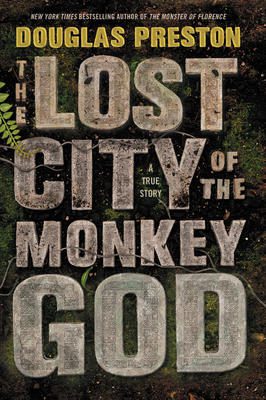 Douglas Preston will be in town on Saturday, Jan. 7, to discuss his latest book, the nonfiction account, The Lost City of the Monkey God. The Poisoned Pen will host him at The Hilton Resort, 6333 N. Scottsdale Road at 7 PM. We’d love to have you come to hear him. Can we entice you with this book review by Dana Stabenow?

For centuries Hondurans have told their children the myth of the Lost City of the Monkey God, but myths are often rooted in fact, and in the early Oughts cinematographer and inveterate searcher for lost cities Steve Elkins starts looking for it. National Geographic/New Yorker writer and novelist Douglas Preston, in the way nosy journalists do, hears tell of this search and talks his way into the 2015 expedition. Preston begins his story with a briefing by an ex-soldier experienced in jungle travel who passes around a photo of someone on a previous expedition bitten by a fer-de-lance. It isn’t pretty. More cheery news of the local fauna follows in the way of spiders and scorpions, and mosquitoes and sand flies eager to pass on lovely diseases like malaria, dengue fever and the dread leishmaniasus. Never heard of it? Me, either, and Preston, either, but he’ll hear a lot more about it shortly. At the end of that first chapter he writes “I paid attention. I really did.” No, he didn’t, or not enough, but it wouldn’t have mattered even if he had.

This book is simply packed with information on a dozen different topics, to begin with a history of archeology in Central and South America and worldwide, legal and not

It must be said that, in general, if archaeologists refused on principle to work with governments known for corruption, most archaeology in the world would come to a halt; there could be no more archaeology in China, Russia, Egypt, Mexico, most of the Middle East, and many countries in Central and South America, Africa and Southeast Asia. I present this not as a justification or an apology, but as an observation on the reality of doing archaeology in a difficult world.

While the Spanish history of Honduras is well known, its pre-Columbian history is still an enigma. People need history in order to know themselves, to build a sense of identity and pride, continuity, community, and hope for the future. This is why the legend of the White City runs so deep in the Honduran national psyche: It’s a direct connection to a pre-Columbian past that was rich, complex, and worthy of remembrance.

A story about the politics between archeologists, which from an outside perspective looks a lot like jealousy on the part of the people who didn’t discover the Lost City of the Monkey God directed at the people who did than it does legitimate differences between academics; a brief but uncomfortably vivid history of the US in Honduras which kind of makes you feel like it may be more than time for the American empire to just, you know, stop with that shit now; and new technology in the form of lidar stabilized by a kind of top secret electronic gyroscope that pings lasers at the spaces between leaves to reflect back the features of the ground beneath them. FYI? The rain forest has a lot of leaves, but the lidar confounds even that dense canopy and discovers the Lost City (and maybe two) just three days into the mapping process.

I could see Sartori’s spiral-bound notebook lying open next to the laptop. In keeping with the methodical scientist he was, he had been jotting daily notes on his work. But underneath the entry for May 5, he had written two words only:

If John McPhee writes the way Yo-Yo Ma plays the cello Preston is at least first chair. When I finished the book I immediately went on line to look at the expedition photos on National Geographic’s website (https://news.nationalgeographic.com/20…) and from his descriptions was easily able to recognize the people, the artifacts and especially the place, this stunningly, dangerously beautiful tropical wilderness untouched for five hundred years. Preston is clearly a man in love

Once again I had the strong feeling, when flying into the valley, that I was leaving the twenty-first century entirely. A precipitous ridge loomed ahead, marking the southern boundary of T1. The pilot heading for a V notch in it. When we cleared the gap, the valley opened up in a rolling landscape of emerald and gold, dappled with the drifting shadows of clouds. The two sinuous rivers ran through it, clear and bright, the sunlight flashing off their riffled waters as the chopper banked…Towering rainforest trees, draped in vines and flowers, carpeted the hills, giving way to sunny glades along the riverbanks. Flocks of egrets flew below, white dots drifting against the green, and the treetops thrashed with the movement of unseen monkeys.

I’m glad he’s that good a writer because frankly the only way I want to experience this place is through his prose and the photos, thanks. I certainly would never even attempt to keep up with Chris Fisher or Dave Yoder in the jungle, that’s for sure.

And then there is leishmaniasus, a ghastly disease which infects Preston and half of the expedition. It’s like cancer in that the cure is as bad as the disease and as of writing the book Preston’s has recurred. In even cheerier news, due to the enabling offices of climate change leishmaniasus is steadily making its way north, occurring now in Texas and Oklahoma. Goody. Although Americans dying of it may be the only way to get the drug companies working on a cure, because why bother if it’s only killing poor people in the Third World? I mean that’s no way to make money.

But the leishmaniusus gives him the final clue to perhaps solve the puzzle: Where did the people of the Lost City go? And why did they leave and, especially, when? Also known as: Disease as destiny.

If you’d like to order a signed copy of The Lost City of the Monkey God, check the Web Store. https://bit.ly/2hIeKVO