David Morrell will be at The Poisoned Pen at 7 PM on Wednesday, Nov. 16 to discuss Ruler of the Night. The Victorian mystery is our Hot Book of the Week. 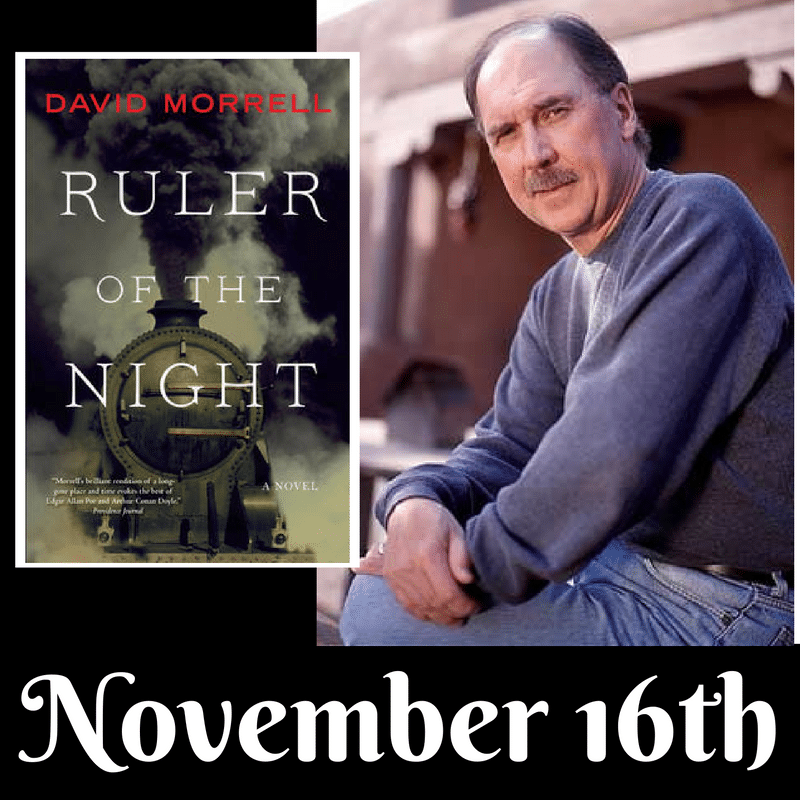 1855. The railway has irrevocably altered English society, effectively changing geography and fueling the industrial revolution by shortening distances between cities: a whole day’s journey can now be covered in a matter of hours. People marvel at their new freedom.

But train travel brings new dangers as well, with England’s first death by train recorded on the very first day of railway operations in 1830. Twenty-five years later, England’s first train murder occurs, paralyzing London with the unthinkable when a gentleman is stabbed to death in a safely locked first-class passenger compartment.

In the next compartment, the brilliant opium-eater Thomas De Quincey and his quick-witted daughter, Emily, discover the homicide in a most gruesome manner. Key witnesses and also resourceful sleuths, they join forces with their allies in Scotland Yard, Detective Ryan and his partner-in-training, Becker, to pursue the killer back into the fogbound streets of London, where other baffling murders occur. Ultimately, De Quincey must confront two ruthless adversaries: this terrifying enemy, and his own opium addiction which endangers his life and his tormented soul.

Ruler of the Night is a riveting blend of fact and fiction which, like master storyteller David Morrell’s previous De Quincey novels, “evokes Victorian London with such finesse that you’ll hear the hooves clattering on cobblestones, the racket of dustmen, and the shrill calls of vendors” (Entertainment Weekly).

Join us Wednesday, November 16, or order a signed copy of Ruler of the Night through the Web Store. https://bit.ly/2ekTp3n