Although we have photos from The Poisoned Pen program featuring Lincoln Child & Douglas Preston’s new Agent Pendergast novel, The Obsidian Chamber, we really should start with the competition between the two authors. 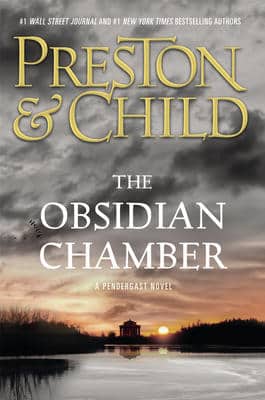 Lincoln Child signed 4,000 copies of The Obsidian Chamber in New York for The Poisoned Pen. Naturally, when Douglas Preston came to the store, he tried to out-do his fellow author. We have video of both signings. Here’s The Poisoned Pen’s e-news about the event:

How much fun is this?

Enjoy two time-lapse videos: one of Lincoln Child signing 4000 copies of The Obsidian Chamber (Grand Central $27) in New York City at the beginning of October to ship to The Pen. 7 hours of work compressed into 1.5 minutes. Watch Lincoln at work here. https://www.facebook.com/PrestonandChild/videos/1104170919619402/

So Lincoln ignited a contest with Doug for the best time, and best video.

The time was roughly a tie. Our video of Doug signing the books has an extra. You can spot it (them) HERE.  https://livestream.com/poisonedpen/events/6517784   Note; we will work to slow it down a little so you can enjoy the surprises more. There’s a leaning curve involved for us.

And you can watch a Livestream of what become a rather raucous event as Lincoln wielded a bullhorn when he felt like it, and our laptop computer handling the Skype decided to reboot itself mid-program. Oy. https://livestream.com/poisonedpen/events/6514290. Lincoln Child, who has already signed all our copies, appears by Skype

Now, if you don’t want to watch the Livestream, or if you’d like to see a few photos from the program, we have those as well.