Do you know of author Jeffrey Siger? If not, why not? Seriously, he’s the author of eight intriguing mysteries set in Greece, featuring Chief Inspector Andreas  Kaldis. There’s so much I could say about these books, but I put Jeff in the hot seat, and I’ll let him answer some questions.

Jeffrey, would you introduce yourself to readers?

I’m honored to be here, Lesa, and I guess the simplest introduction is to say I’m a Barry and Lefty Awards nominated mystery-thriller writer (losing to the not too shabby likes of C.J. Box and Louise Penny, respectively â˜º) living on the Greek Aegean island of Mykonos.  A former Wall Street lawyer and name partner in my own New York City law firm, a decade ago I gave it all up to write my tell-it-like-it-is Chief Inspector Andreas Kaldis series. The New York Times has called the series, “thoughtful police procedurals set in picturesque but not untroubled Greek locales.”  I’m also honored to have served as Chair of Bouchercon’s National Board and as an Adjunct Professor of English at Washington & Jefferson College, teaching mystery writing.

Andreas Kaldis is an Athenian born second-generation cop, a politically incorrect, honest observer of his times who endures and grows, despite all that life and the powerful throw at him and his beloved country. His life moves forward through the series, never static, always growing.  I like the way serious issues, political and otherwise, are expressed around him, and as my writing is meant to convey to non-Greeks what I see as issues confronting modern day Greece in a manner that touches upon its ancient roots, Andreas is the perfect character for that expression.

Without spoilers, tell us about Santorini Caesars. 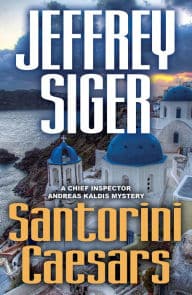 When a young demonstrator is publicly assassinated in the heart of protest-charged Athens, the motive is murky and the array of suspects immense.  Kaldis’ investigation leads him and his team to beautiful Santorini—held in legend to be the site of the lost island of Atlantis—and a hush-hush gathering of the Caesars, a cadre of Greece’s top military leaders seeking to form their own response to the crises facing their country. Is it a coup d’Ã©tat or something else?  The answer is by no means clear, but the case resonates with political dimensions, and as international intrigues evolve, the threat of another—far more dramatic—assassination looms ever more real.

So, too, does the realization that only Kaldis can stop it.  But at what price?  Greece’s government is in chaos, its goals and leadership suspect, and Kaldis is forever at odds with its methods.  Life is not the same, nor is it likely to return to better days any time soon. With a new child on the way, and their young son coming face-to-face with the harsh nature of the world around him, Kaldis and his wife wonder if carrying on the fight matters any more.  It is a time for testing character, commitment, and the common good—and for saving the nation from chaos.

Your books deal with very serious subjects but often have humor that stems from the relationships between Kaldis and others. How did you come up with his team?

Some day, I wish my characters would let me in on the secret of how they came to be. Friends tell me that my primary character, Andreas Kaldis, and I share the same sense of humor and the same way of addressing problems. I never intentionally set out to do that, but I think ultimately a writer cannot help but put part of himself into many of his characters.

By and large I have to say that my characters are the product of some alchemy lurking within my deep, dark mysterious soul just waiting to turn an unformed sense of beings I never knew into characters as unique as we are to each other. Yes, sometimes I consciously model a character on someone I know well (Tassos is an homage of sorts to a departed friend who inspired me to write the series), but mostly I assemble a new being from disparate physical and emotional elements stored in my individualized spare parts warehouse.  Bottom line: Writers are body snatchers.

Now, tell us about your love affair with Greece. Do you have a favorite place there?

It began almost 35-years ago when a friend told me I would love Greece. She was right.  As for my favorite place there, when I first set foot on Mykonos I felt as if I’d returned home, and that very first day I made a life-long friend who proved to be the most loved man on the island. Through him and his family, I became part of the island’s community, the “American Mykoniate” to be precise.  Yes, Greece is the birthplace of the gods, the cradle of European civilization, the bridge between East and West, with Spartan courage, Athenian democracy, Olympic achievement, and Trojan intrigue all calling it home, but to me it is all about family.

Where do you take visitors?

That depends on what they have in mind, and on Mykonos sometimes I don’t dare ask. â˜º  Having said that, I don’t think any visit to Mykonos—if not Greece—is complete without a visit to the ancient ruins on the nearby Holy Island of Delos, the birthplace of Apollo, god of light, and his twin sister, Artemis, goddess of the hunt.  At the very least, I prod visitors toward taking a stroll at sunset along a beach looking across the sea toward Delos.  There they can walk where the ancients once walked, watching the sun set into the sea as the ancients must have done, and undoubtedly wonder how akin the ancients’ thoughts at such moments might have been to their own.

Tell us about the Murder is Everywhere blog.

Murder is Everywhere ( https://murderiseverywhere.blogspot.com/ )   came into existence out of Bouchercon 2009 when six renowned mystery writers from around the world, propelled by the late, great Leighton Gage, agreed to create a blog site dedicated to international mystery writing.  Every day MIE offers fresh, thoughtful eclectic posts about the venues where its contributors place their work.  In addition to Leighton (who wrote about Brazil), of the six original members (I was the seventh) Tim Hallinan (Thailand), Yrsa Sigurdardottir (Iceland), and Dan Waddell (United Kingdom) no longer write for MIE—though still part of our family—while Cara Black (France) and Michael Stanley (Michael Sears and Stan Trollip–Southern Africa) remain as stalwarts of the site, now joined by Leye Adenle (Nigeria/London), Annamaria Alfieri (East Africa and South America), Sujata Massey (India and Japan), Caro Ramsay (Scotland), ZoÃ« Sharp (No Fixed Abode), Susan Spann (Japan), and moi (Greece).

I like a quote from Neil Gaiman. “Trust your obsession.” Did you ever have an obsession that you had to turn into a story? What was it?

I always wanted to write a story about Mykonos, its people, their rich cultural history and enormously colorful present, but I didn’t want to write about pelicans, flowers, or summer Greek tavernas.  I wanted to write about action and mystery.   I wanted to come up with a dynamite story that would allow me to make Mykonos a character in the book, one that would show all the things I loved about it. Something that would take the reader behind the scenes to see the Mykonos I knew, something tourists, even off-island Greeks never saw.  So, I decided to drop a serial killer into the midst of my island paradise. That’s how Murder in Mykonos, came to be as a “Mama Mia setting for a No Country For Old Men story.”  It also went on to be the #1 best selling English-language book in Greece, and make The New York Times’ radar list of hardcover best sellers.

At the top of the pile is Sunshine Noir, a just published anthology of short stories from seventeen terrific southern climes authors (me too) edited by Annamaria Alfieri and Michael Stanley (with prefaces by Peter James and Tim Hallinan, and an introduction by Peter Rozovsky), that has our Nordic Noir brethren quaking in their frozen tundra boots.  I’m saving Tim Hallinan’s soon to be released Fields Where They Lay for Christmas, and have strategically positioned in the pile to get me there on time, Annamaria Alfieri’s just released Idol of Mombasa, Ingrid Thoft’s Brutality, Marc Cameron’s Field of Fire, Lou Berney’s The Long and Faraway Gone, and Lee Child’s not yet released Night School““all great books from great people.

Thank you, Jeff! If you would like to read more about Jeff, The Huffington Post did an interview as well. https://huff.to/2cCDVGT

Jeffrey will be appearing at The Poisoned Pen, along with Mark Pryor, author of The Paris Librarian, on Saturday, October 15 at 2 PM. Signed copies of Jeff’s books, including Santorini Caesars, are available through the Web Store. https://bit.ly/2cWaFHu