Welcome back! Ann Parker, author of What Gold Buys, recently sat In the Hot Seat for questions. Today is the second half of that interview. 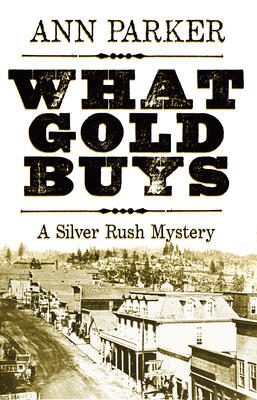 Okay, I know that’s not what you mean…

I’m polishing up a couple of short stories to submit for consideration to a couple of anthologies. I’m pulling together what I need to take a deep breath and plunge into Book #6 (titles always come last for me, so it’s simply “Book #6″ for now). I see What Gold Buys as closing a cycle that started with Silver Lies, the first book of the series. The series will continue, but this next one will be taking Inez (and me) into some uncharted territory…

Yes, I’m being intentionally vague about this next in the Silver Rush “saga” for now!

So, our other questions will be off topic. It’s that dinner party question first. If you could invite an author and their hero or villain to dinner, who would you invite, and why?

Well, I’m a big fan of the George Smiley novels of John le CarrÃ© (aka David John Moore Cornwell). I’d love to invite le Carre and Smiley to dinner. I’m not certain we’d get past the appetizers, though, as I’d want to quiz them endlessly about their time(s) in MI5 and MI6, and what it was like during the Cold War. Being the polite sorts they probably are, they would no doubt suddenly find they have important business elsewhere, offer their regrets, and the dinner party would come to an abrupt end. Oh well. More appetizers for me!

If friends come to visit, where do you like to take them?

Some of my favorite spots to escape for a really good cup of coffee (keep in mind I live the outer suburbs of the San Francisco Bay Area… this isn’t Portland or Seattle!). Our nearby independent bookstore (Towne Center Books). The local “Vine Cinema and Alehouse” shows independent films, has comfy couches, and is a great place to fall into the magic of movies. If there’s more time, then a jaunt to Yosemite is nice… however, I’ll admit it’s been many years since I’ve been there myself. Maybe I need more out-of-town friends to come visit!

How would Inez Stannert describe you?

I think Inez would look a little askance at me, to be honest. At first, she would probably view me suspiciously, perhaps dismissively, rather like how she views most of the “church women” she runs up against in Leadville. After all, let’s face it, I am a meek and mild suburban working mother and wife, leading a pretty staid life compared to her rather complicated and adventurous one gallivanting around on the edge of propriety. If we played a game of poker—or any kind of cards (I’m rather fond of twenty-one, but only if playing for M&Ms or toothpicks)—she’d quickly discover I am a very lousy player, being unable to keep a poker face to save my life (or my M&Ms).

However, should we have the chance to discuss literature—Milton’s Paradise Lost, for instance, or Shakespeare’s plays, W.B. Yeats, T.S. Eliot (well, a bit after her time at this point), who knows? We might find common points of interest. So, after all this let’s-get-to-know-each-other stuff, how would Inez describe me? Perhaps as “cautious, a bit of a mouse, and not a gambler, that is certain. But she examines the world and its inhabitants closely, not just with her eyes, but also with her ears and all her senses. She is kind and cares deeply… she has a heart and an inquiring mind, and uses them both.”

Other than author, what’s the most interesting job you ever had?

I love being a science writer. It allows me to ask nosey and “stupid” questions with impunity, I get to find out all about “bleeding edge” science and technology as it is being developed, and I get to meet scientists and researchers who are passionate about their work.

One of the most eye-opening jobs I had was working as a maid in a high-class summer resort. People pretty much acted as if maids were “invisible” people, and wow, the things they did and the conditions of some of those rooms…

Final question. What’s been on your TBR pile recently?

If we’re talking fiction, Jar City by Arnaldur IndriÃ°ason was top of my pile for the Towne Center mystery book club, which I lead (kind of sort of), so I finished that in June. The summer pile for that club also includes Madam Will You Talk? by Mary Stewart and Absolute Power by David Baldacci. Non-book-club summer reading included The Preacher by Ted Thackery, Jr., The Badwater Gospel by R.W. Magill, and The Green Muse by Jessie Prichard Hunter. I’m partway through Maids of Misfortune by M. Louisa Locke and enjoying it immensely. Next up on my “casual reading” piles for perusal are Chorus of the Dead by Tracy L. Ward, The Black Gang by H.C. McNeile, A Curious Beginning by Deanna Raybourn, and Hangtown Creek: A tale of the California Goldrush by John Putnam.

In a separate pile is lots of nonfiction I’m working through for the mysterious Book #6.

And of course, having mentioned le CarrÃ©, I now have a hankering to do a re-read of The Spy Who Came in from the Cold. I think this is why the TBR piles never seem to diminish, no matter how much I read.

Thank you, Ann! Ann’s website is www.annparker.net. You can purchase an autographed copy of What Gold Buys, the latest Silver Rush mystery, through the Web Store. https://bit.ly/2djWpfe

(Leadville’s House with the Eye Museum was the home of Eugene Robitaille, who plays a small, but significant role in What Gold Buys.)