Bruce DeSilva, author of The Dread Line, is appearing at 7 PM, Thursday, Sept. 15 at the Poisoned Pen, along with Reed Farrel Coleman. I was a little nervous asking questions of a journalist, but he was kind enough to answer questions In the Hot Seat.

Bruce, would you introduce yourself to the readers?

I grew up in a tiny Massachusetts mill town where the mill closed when he was ten. I had an austere childhood bereft of iPods, X-Boxes, and all the other cool stuff that hadn’t been invented yet. In this parochial little town, metaphors and alliteration were also in short supply. Nevertheless, my crime fiction has won the Edgar and Macavity Awards; has been listed as a finalist for the Shamus, Anthony, and Barry Awards; and has been published in ten foreign languages. My short stories have appeared in Akashic Press’s award-winning noir anthologies, and my book reviews for The Associated Press appear in hundreds of publications. Previously, I was a journalist for forty years, most recently as writing coach world-wide for the AP, editing stories that won nearly every major journalism prize including the Pulitzer. My new novel, “The Dread Line,” is the fifth in my series featuring Liam Mulligan.

How did you first become interested in journalism? What led you to crime fiction?

I guess I was always a journalist. I wrote for and edited the sports page of my high school newspaper, and my first job after college was covering the small town of Warren, R.I., for the Providence Journal. For most of my journalism career–one that took me from New York City to London and from mainland China to the Arctic Circle—it never occurred to me to write fiction. But one day, when I was working for a metropolitan newspaper in New England, I got a letter from a reader praising a “nice little story” I’d written. “It could be the outline for a novel. Have you considered that?” the reader asked.  The letter was from Evan Hunter, who wrote wonderful literary novels under his own name and the fine 87th Precinct police procedurals under the penname Ed McBain. I’d always loved reading crime novels, and now the great Ed McBain was telling me he thought I could write one! That got me started.

Would you introduce us to Liam Mulligan?

Mulligan is in his mid-40s now, and in my first four novels, he was working in a dead-end job as an investigative reporter for a dying newspaper in Providence, R.I. Mulligan is dogged, given to ill-advised wisecracks and not good at following orders. He has a strong but shifting sense of justice, making him willing to work with some very bad people to bring worse people to justice. He was born and raised in Providence, a place with a long history of enduring, and often tolerating, organized crime and political corruption, and this makes him willing to overlook some forms of lawbreaking. Although his job is to root out crime and corruption, he sees nothing wrong, or even hypocritical, about placing a bet with a bookie or slipping a state transportation worker forty bucks to get an inspection sticker for his aging Ford Bronco. As Mulligan sees it, graft comes in two varieties, good and bad, just like cholesterol. The good kind puts braces on the teeth of the children of underpaid state workers. The bad kind enriches the rich and powerful and the expense of everyone else. Mulligan says that bad graft is a cancer on society but that without the lubrication of good graft, nothing much would get done in Providence, and nothing at all would happen on time.

“The Dread Line” finds Liam in a new phase in his life. Would you tell us about the story, without spoilers? 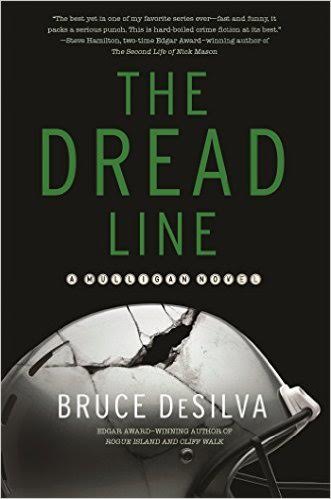 Since getting fired from his newspaper job last year (“A Scourge of Vipers,” 2015), Mulligan has been trying to piece together a new life—one that straddles both sides of the law. He’s getting some part-time work with his friend McCracken’s detective agency. He’s picking up beer money by freelancing for a local news website. And he’s looking after his semi-retired mobster-friend’s bookmaking business. But of course, he still can’t seem to stay out of trouble. InThe Dread Line, the fifth book in this Edgar Award-winning series, Mulligan is feuding with a feral tomcat that keeps leaving its daily kills on his porch. He’s obsessed with a baffling jewelry heist. And he’s enraged that someone in town is torturing animals. All of this keeps distracting him from a big case that needs his attention. The New England Patriots, still shaken by murder charges against their superstar tight end (true story), have hired Mulligan and McCracken (not a true story) to investigate the background of a college athlete they are thinking of drafting. At first, the job seems routine, but as soon as they start asking questions, they get push-back. The player, it seems, has something to hide—and someone is willing to kill to make sure it remains secret.

You write about Providence, RI, which is not often a setting in fiction. What does Providence offer as a setting for a crime novel?

A few weeks before my first crime novel was published, Newsweek ran a story ranking the states in order of most corrupt to last. They said New Jersey, where I live now, is the most corrupt, but that Rhode Island is the most corrupt per capita. You can trace the smallest state’s culture of organized crime and political corruption all the way back to one of the first colonial governors dining with Captain Kidd. But the state and its capital city also have a legacy of decency dating back to its gentle founder, Roger Williams. The competing strands of good and evil wind all the way through the state’s history, and the enduring tension between them make for great storytelling.

But that’s not all. Most crime novels unfold in big, anonymous cities like Los Angeles, Miami, and Chicago—and there are many fine ones set in small towns and rural areas. But Providence is different. It’s large enough to have the usual array of urban problems, and it is surprisingly cosmopolitan. But it’s so small that it’s claustrophobic. Nearly everybody you meet on the street knows your name, making it very difficult to keep a secret. That adds complications for everyone from criminals and cops to investigative reporters and private eyes—people who do their best and worst work in the shadows.

Although authors say they’re not writing about themselves, there must be some of you in Liam Mulligan. How is he like you? How is he different?

Several of my former journalism colleagues, including two whose last name is Mulligan, think the character is based on them. But Mulligan is me, except that he’s 25  years younger, six inches taller, and quicker with a quip, always tossing off a smart remark that I wouldn’t think of until a few days later.

Neil Gaiman said, “Trust your obsession.” Did you ever have an obsession that you had to turn into a story? What was it?

Nearly 30 years ago, when I was a journalist in New England, I covered a psychopath named Craig Price. He was the youngest serial killer in U.S. history, just 13 years old when he began stabbing women and little girls to death. And that’s not the interesting part. He was just 15 when he was caught, and at the time, Rhode Island’s juvenile justice statutes hadn’t been updated in decades. When they were written, no one had envisioned a child like him, so the law required that all juveniles, regardless of their crimes, be released at age 21 and given a new start in life. The story was so terrible that I once I became a novelist, I vowed never to revisit the story—not even as fiction. But Price’s story haunted my dreams, so finally, I felt compelled to loosely base “Providence Rag,” the third novel in the series, on that case. But it is an unusual serial killer book because the murders are committed and the killer caught in the first 75 pages. The rest of the book is about how Mulligan, and the entire state, deal with the prospect of releasing the psychopath into the population to kill again.

You’re an author and journalist. I’m not going to ask you about your favorite literary hero. Who is your favorite villain or antihero?

I’m tempted to say Price because I think “Providence Rag” may be the best book in the Mulligan series—and because the case still gives me nightmares. But I guess I’ll go with novelist Andrew Vachss’ anti-hero, a career criminal named Burke who spends every book hunting down, and usually murdering, child abusers.

Linda Fairstein recently discussed the writing skills she learned while practicing law. What skills from your years as a journalist do you bring to writing crime novels?

People often tell me that journalism must be a great training ground for novelists. I tell them that daily journalism, as it is usually practiced, is not. It offers stick figures instead of characterization, street addresses in lieu of setting, and so-called stories that lack anything even vaguely resembling a plot. A journalism career does provide its practitioners with a wealth of experiences to draw on, but that should be the same for anyone who lives a life and remains relatively conscious. The main lesson I drew from journalism is that writing is a job. I do not wait for inspiration. I do not look for my muse. I am not allowed to have writer’s block. I put my butt in my chair every day and write.

The final question. What has been on your TBR pile this summer?

Three novels by friends of mine are on the top of my stack:  “Robert B. Parker’s Debt to Pay” by Reed Farrel Coleman, “Let the Devil Out” by Bill Loehfelm, and “The Innocents” by Ace Atkins. But I’m currently reading the new, Brash Books edition of “Road to Perdition” by Max Allan Collins. That story began as a graphic novel and then became the movie starring Tom Hanks. When the movie came out, Collins produced a novelization of the film, but his publisher cut about 30,000 words worth of stuff that had not been in the movie. The new, expanded edition is the novelization that Collins intended.

Thank you, Bruce. Bruce DeSilva’s website is https://brucedesilva.com/ And, signed copies of DeSilva’s The Dread Line can be ordered through the Web Store. https://bit.ly/2c1bqld