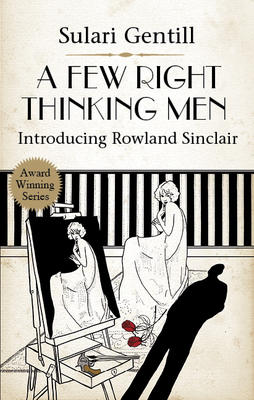 This is the first of eight Rowland Sinclair Mysteries set in 1930s Australia. This first one was originally published in Australia in 2011. And, A Few Right Thinking Men recently received a starred review in Library Journal.

“In 1931 Sydney, Australia, unemployment is high and tension is mounting, especially among working people who feel the upper class are handing them a raw deal. Rowland (“Rowly”) Sinclair was born with a silver spoon in his mouth, but has taken up the mantle of gentleman communist. He is, after all, a bohemian artist. His older brother is embarrassed by Rowly, but when their elderly uncle is murdered at home, Rowly sets out to uncover who might have wanted a sweet old man dead. As Uncle Rowly was a silent partner in a speakeasy, gangsters might have had it out for him, but our sleuth soon learns that fascist politicians make bad bedfellows. While the vintage Down Under settings might make this debut, which was short-listed for the Commonwealth Writers’ Prize Best First Book, comparable to Kerry Fisher’s Melbourne-based Phryne Fisher 1920s mysteries, Gentill works in historical events that add verisimilitude to her story. There are more political machinations going on here than Phryne could ever contemplate. VERDICT Thanks to Poisoned Pen Press for bringing another award-winning Australian crime writer to U.S. shores. Her witty hero will delight traditional mystery buffs.”

Sulari Gentill is as fascinating as the setting of her mysteries. She was kind enough to agree to sit in the hot seat for an interview. It’s my pleasure to introduce you to Sulari Gentill.

Sulari, although The Poisoned Pen has followers worldwide, I’m sure many readers are not familiar with your work because your books have, until now, not been published in the U.S. Would you introduce yourself?

I’m Australian though I was born in Sri Lanka.  My family emigrated when I was still a baby, and we embarked on what seemed like a trek around the planet.  I started school and learned to speak English in Zambia, and we arrived in Australia when I was six.  That’s longer ago than I care to admit.  For the most part I grew up in Brisbane, at a time when it was still really an overgrown country town.  I attended my local school, built club houses in the mulberry trees by the Brisbane River and plotted world domination with my friends.

In time, I set off to University to study Astrophysics and somehow came out with a law degree.  I was duly admitted as a barrister and solicitor to the High Court of Australia and embarked on a career in the corporate sector.  Whilst practicing law can be creative, they don’t really like you to just make things up…or admit to it anyway.  Writing seemed liked a better way to indulge my fondness for fabrication.

Nowadays I live on a small truffle farm in the foothills of the Snowy Mountains with my husband, Michael, and our sons—two wild and fearless boys whose plans for world domination are more advanced than mine ever were!

Why did you turn to crime writing?

To be honest, it was a whim.  I simply decided to write a novel one day… I was a serial hobbyist, you see, and I’d finished the welding course and needed something else to do with the time I wasn’t lawyering or wrangling my boys.  There was no grand plan, no epiphany, just a sense of curiosity as to what the stories in my head would look like on the page.

Once I began writing however, it soon became clear that this was more than a passing fancy.  Writing seemed as natural a breathing and the consequences of stopping as dire.  Most of my other hobbies fell away as I became consumed with storytelling.  I’m still as delighted and excited to write as I was that first day.

Would you introduce us to Rowland Sinclair?

Dear readers, allow me to introduce Rowland Sinclair, who hails from one of the wealthiest and most respectable families in 1930s Australia.  An artist and a gentleman, Rowland is the unrepentant black sheep of the Sinclair pastoral dynasty. He blithely flouts the expectations of conservative Sydney, courting scandal and keeping company with entirely the wrong crowd.  Adamantly indifferent to politics, Rowland walks a fine line between his conservative birthright and his more libertine associations.  He is twenty-six years old at this first meeting, and living in the family’s exclusive Sydney mansion into which he has invited a louche band of penniless artists and poets.  He is a loyal friend, a passionate painter, a dry wit, and hopelessly in love with woman who won’t have him.

Tell us about A Few Right Thinking Men, without spoiling the story.

Written into real historical events, A Few Right Thinking Men is set in the tumultuous world of New South Wales in the 1930s.  It was time of extreme politics and social upheaval.  Communism appealed to the unemployed and working classes and the establishment gathered in secret fascist armies.  The story follows Rowland Sinclair, artist and gentleman, who manages to avoid politics almost entirely, until the brutal murder of his beloved uncle involves him in a dangerous infiltration of clandestine militias. In his dogged search for justice, he finds himself embroiled in treason and conspiracy as Australia moves to the brink of revolution.

Why did you pick the 1930s in Australia as the time period for this series?

My husband, Michael, happens to be an English teacher and an historian. I have always used him shamelessly to edit and sanity check my work.  When I first began to write, I would foist upon him manuscript after manuscript steeped in the mythology of the Ancient Greeks, filled with characters like Agamemnon, Menelaus, Odysseus and Achilles.  He would go through the pages, struggling with the pronunciation but dutifully providing me with comment and correction, until one day he broke down and demanded to know why I couldn’t “write something about people with names like Peter and Paul?”

Of course I ignored him…initially at least.  But writing can be quite an isolating obsession.  I spend a great deal of time in my own head, and whilst that’s fine for me, it is hard for those who live with me.  A great part of the challenge in being a writer is to make your imaginary world work with the real world in which you actually live.  And so I made a pragmatic decision to build a bridge towards the poor man who had married a lawyer and then found himself financially and otherwise tied to someone who refused to do much else but write.

I looked for a story to which my husband could relate, which would engage his imagination as much as mine.  Michael’s particular area of expertise is the extreme political movements of the early 1930s in New South Wales, and so, I set the Rowland Sinclair Mysteries in that context.

By doing so, I rather conveniently ensured that Michael would continue editing my novels—he cares far too much about the genuine history of the time to let me play with it unsupervised!  I also procured for myself an invaluable source of information.  It is one thing to read about a time, and another to have the opportunity to discuss it with someone who is an expert in that period of history.  For me, dialogue with an historian affords a richer understanding and fuels the kind of creative excitement that is fundamental to bringing an era to life.

If you’re working on something now, what can you tell us about it?

I’ve very recently completed and submitted the manuscript for the eighth book in the Rowland Sinclair series… I expect I’ll be working on edits rather soon.

I’ve also just finished my first contemporary crime novel and am knee deep in a couple of speculative novels for young adults. In addition I’ve started writing a trilogy set in the early colonial era—tall ships, convicts, bushrangers, that sort of thing.  I expect one of these works in progress will soon begin to dominate my time and become my obsession, but at the moment, they are all equally full of potential and possibility.

Many of us will never get to Australia. When friends come to visit, what’s your favorite place to take them?

Australia is a very big country.  In that big country I live many hours from any capital city, in a very small rural town.  The distances are such that many of the sights for which Australia is famous (The Sydney Opera House, the Harbour Bridge, the Barrier Reef, Bondi Beach, Uluru etc) are too far away to be included on a sightseeing tour from my home in the Snowy Mountains.  But these mountains are themselves iconic in Australian culture.  It was here that the image of the hard-riding Australian stockman was forged.  It is also here that some of our mightiest rivers begin in peaks of the High Country.  The region is steeped in Indigenous history and post-settlement folklore.  I take my visitors to see kangaroos and brumbies up close, to waterholes in which platypi swim.  I show them limestone caves, scar trees and hot springs.  I take them to bush poetry slams and dances in tiny country town halls.  At night I show them the broadness of our sky and point out the Southern Cross.

Where would you like to go in the world, someplace you’ve never been?

Greece, New York, Paris… there are many places I’ve only been in my books.

What five words or phrases would Rowland Sinclair use to describe you?

To be honest, Rowland would be more likely to describe me with a sketch as opposed to words, but if he were forced, I believe he would say I was:

Thank you, Sulari, for taking time for the interview.

If you would like to order a copy of the first in the Rowland Sinclair series, A Few Right Thinking Men, you can order it through the web store. https://bit.ly/1sO1j89