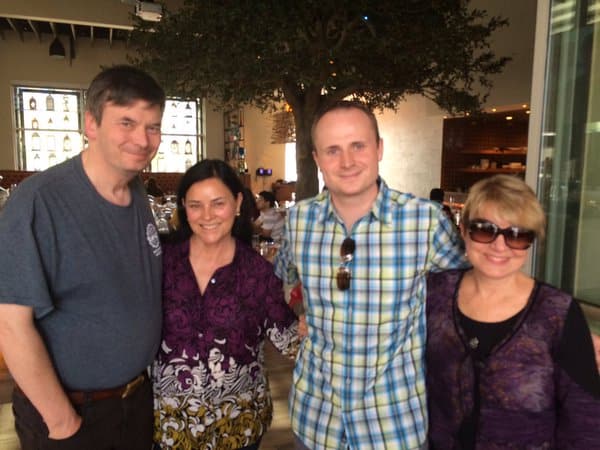 At the Poisoned Pen Bookstore in Scottsdale, Ariz., this past weekend, authors Ian Rankin, Diana Gabaldon, Michael Koryta and store owner Barbara Peters celebrated the start of Koryta’s tenure this week as the Diana Gabaldon/Poisoned Pen Writer-in-Residence and Rankin’s book tour stop there for Even Dogs in the Wild. As part of the program, Koryta is serving as host at a variety of author events at the bookstore. He’s also leading two workshops: one for students at Phoenix Country Day School and another for community members at the Poisoned Pen, both of which will explore narrative writing and the use of suspense in fiction and non-fiction.

Peters said she chose Koryta because “despite his youth, he’s published 11 books in a variety of genres (thrillers, suspense, supernatural, private eye), and he’s garnered great award attention, including an Edgar nomination for Best First Novel and the Los Angeles Times Book Prize and other accolades. Every major thriller author writing today is a fan of his and he consistently receives rave reviews from major media, especially the New York Times and Entertainment Weekly. I think he’s the perfect author to connect with readers and writers of all ages, from young adults to seniors, as he will be doing during his very busy week in Scottsdale. I love his constant experimentation; nothing grows stale. And he’s a wonderful stylist as well as engaging and humorous speaker. All this, and he’s only 33.”