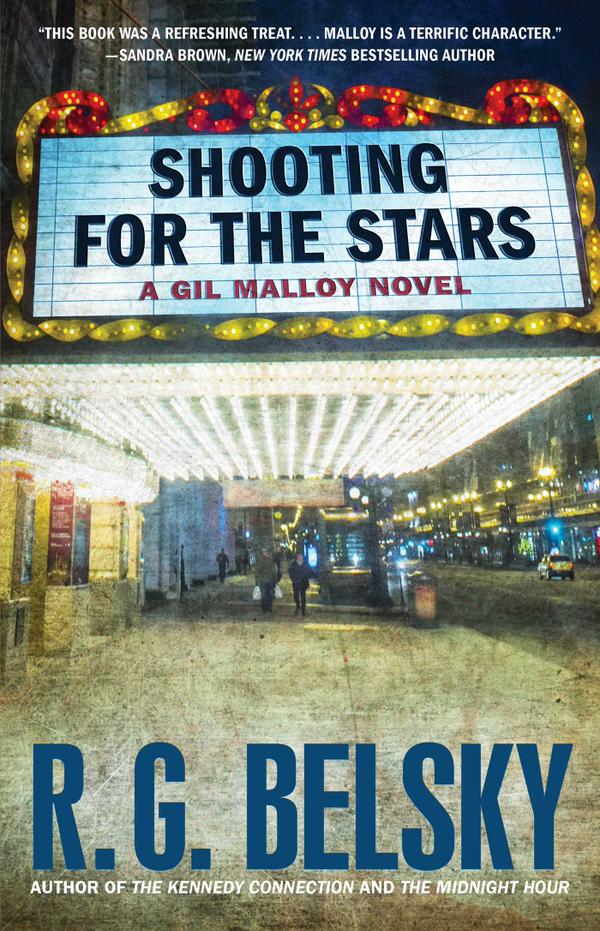 I’m a tabloid journalist and I write mystery novels. So people rarely ask me where I come up with the ideas for my books. They just assume I get them from the sensational stories I’ve covered in the newsroom.

Well, there is some truth I guess to the “ripped from the headlines” formula for writing crime fiction ““ first made popular by the TV show “Law and Order.” But it’s really not that easy to come up with a good mystery.

My new book SHOOTING FOR THE STARS (Atria ““ August 11) is about a newspaper reporter named Gil Malloy who investigates the long-ago murder of a legendary Hollywood actress and a series of present day celebrity killings. I draw upon some real life celebrity crime cases ““ most notably the murders of John Lennon and actress Sharon Tate, plus the controversial death of Marilyn Monroe ““ for inspiration.

But I go much, much further by adding to the plot a Charles Manson-like family of fanatics with a hatred of celebrities; a brutal underworld boss who became romantically obsessed with the actress; and greedy family members who have been using her death to cash in big time on her name.

Oh, and I also raise the possibility that the murdered actress might not really be dead and instead faked her death (and is presumably now living with Jim Morrison, Elvis and Andy Kaufman, if you believe that sort of thing).

I did the same kind of thing in my previous book, THE KENNEDY CONNECTION ““ the first in the Gil Malloy series.

The “ripped from the headlines” topic there was the most famous unsolved murder mystery case in American history (unless, of course, you believe the Warren Report) ““ the assassination of President John F. Kennedy. But rather than just rehash all the old conspiracy theories, I created a fictional secret son of Lee Harvey Oswald ““ whose explosive new evidence led Gil Malloy to a series of shocking revelations about both the half century old JFK assassination in Dallas and a series of present day murders in New York City.

A lot of other mystery authors do this sort of thing too. They take the beginning of their book from a real life crime. But then they create their own story, raise their own questions and ““ most importantly ““ come up with their own answers for who did it and how and why and all the rest.

Because just taking a story from the headlines is never enough to create a great murder story.

I do remember a story and a famous headline that I was personally involved with when I was city editor of the New York Post: “Headless Body in Topless Bar.” It was about a holdup man who robbed a bar, killed the owner and then cut off the victim’s head for reasons too bizarre to understand. That “Headless Body in Topless Bar” headline wound up being memorialized on T-shirts and buttons, on late night talk shows, and it even became the title of a movie loosely based on the incident. Over the year, it has truly become a cult classic — the “Night of the Living Dead” of headlines.

Now I don’t think there’s a mystery author anywhere ““ even on our best day ““ who could make up a story that wild.

R.G. Belsky is an author of crime fiction and a journalist in New York City. His new suspense thriller, SHOOTING FOR THE STARS, is being published by Atria on August 11. It is the latest in a series of books featuring Gil Malloy, a hard-driving newspaper reporter with a penchant for breaking big stories on the front page of the New York Daily News. The first book in the Gil Malloy series – THE KENNEDY CONNECTION – was published in 2014 and an ebook novella titled THE MIDNIGHT HOUR came out in February 2015. Belsky himself is a former managing editor at the Daily News and writes about the media from an extensive background in newspapers, magazines and TV/digital news. At the Daily News, he also held the titles of metropolitan editor and deputy national editor. Before that, he was metropolitan editor of the New York Post and news editor at Star magazine. Belsky was most recently the managing editor for news at NBCNews.com. His previous suspense novels include PLAYING DEAD and LOVERBOY. He lives in New York City