Dana Haynes, author of four thriller novels from St. Martin’s Press, will offer a workshop and a signing from noon to 2 p.m. Sunday, Sept. 14, at The Poisoned Pen,  4014 N. Goldwater Blvd. No. 101, Scottsdale, AZ. (www.poisonedpen.com)

His latest novel, GUN METAL HEART, has just been released under the Minotaur Books imprint of St. Martin’s Press. (www.dana-haynes.com) 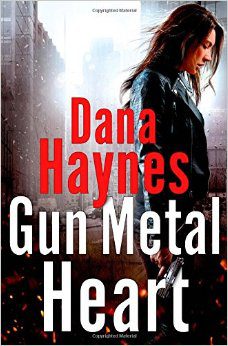 Haynes will offer a workshop titled, “It Ain’t Rocket Surgery — Secrets to Make Novel Writing Easier.” Haynes helps aspiring writers master the shortcuts and tricks of the trade that will help them get from concept to those ellusive words, “The End.”

In GUN METAL HEART, Daria Gibron is a former soldier and spy now working as a freelance operative with a long and deadly history. While hiding in Italy from her various enemies, Daria gets dragged into battle against a Serbian hit squad, a renegade band of ex-CIA agents, and a woman whose skills and background are a match for Daria. The tale rockets from Florence, through the mountains of France, and into the former Yugoslavia, including Sarajevo and Belgrade.

Daria made her debut in Haynes’s 2010 thriller CRASHERS, which focused on a team of airline crash investigators. She also appeared in Haynes’s BREAKING POINT and Daria’s own breakout novel, ICE COLD KILL.

The reviews for GUN METAL HEART have been pouring in since its debut in August:

“Fans of the Brad Thor and Robert Ludlum vein have a new author to enjoy.” — RT Book Review.

“What’s a girl to do? If she’s Daria, she kicks butt. … Daria is an arresting character, like a female, petite Jack Reacher.” — Shelf Awareness

“Daria is … irresistible and lethally dangerous … in Haynes’s most fully realized book to date.” — bookreporter.com