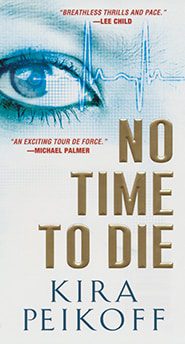 A few years back, I saw a documentary on Discovery Health about a young woman who had inexplicably stopped aging. She was almost 20 years old but had stayed frozen as a toddler her whole life, baffling doctors and scientists alike. The case caught my attention because I’ve always been interested in medical mysteries, and like many people, I’m also fixated on the promise of eternal youth. Yet staying young forever, as welcome as it might be, could also be a curse. I decided to explore it further in a novel, but I didn’t want my protagonist stuck as a toddler without much mental or emotional capacity.  So I decided to trap her in the worst possible page for maximum drama and frustration. What could be worse than 14?

Some leading researchers believe the end of aging is within reach–perhaps in the next century. One respected scientist, Aubrey de Gray, thinks that the first person who will live to age 1,000 is already alive now.

I feel into it by accident. When I started writing fiction, I gravitated toward stories with high stakes, increasing tension, cliffhanger chapters, and a fast pace. I didn’t actually intend to write in any genre, but after I wrote my first book, I realized I’d written a thriller.

Michael Crichton, Michael Palmer, Lisa Unger, Gillian Flynn. If you want to get old-school, I would add O. Henry and one of my favorite books as a teen: The Scarlet Pimpernel.

The threshold for exactness is much looser in fiction. In non-fiction, I am careful to be extremely accurate in my reporting. Accuracy to a journalist is like steadiness to a surgeon. You’re useless without it. (You won’t accidentally kill anyone–one nice thing about being a writer–but you might damage someone’s reputation by misrepresenting a source.) In fiction, there’s greater freedom to stray without that kind of accountability. I try to stay as true-to-life still as I can, but I do have to stretch and imagine a lot, which makes it more fun and also a hundred times harder.

My wonderful late mentor, Michael Palmer, suggested the title to me when I told him I was stuck on a title. (Titles are impossible.) Everyone at the publishing house immediately liked it, so we went with it. It’s extra meaningful because Michael died shortly after I turned in the final manuscript. It was one of the last novels he read.

Yes, writing about the lab work was more of an intellectual challenge, because I had to figure out how to incorporate real-life details with fictional ones. It was like a puzzle. Writing about the human side came more naturally. I tried to tap into how I might feel in their place, and why I might do what they were doing, so I could access that yearning and vulnerability.

First and foremost, that they will be transported on a thrilling and satisfying journey with characters they’ve become invested in. Then: that they’ll possibly think about their own positions on the controversial subjects the book raises, and finally that they will be shocked by the big twist ending.