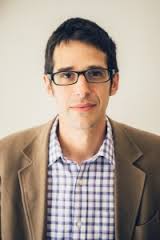 Ben H. Winters is the author of seven novels, including most recently Countdown City (Quirk), an NPR Best Book of 2013 and the winner of the Philip K. Dick Award. Countdown City is the sequel to The Last Policeman, which was the recipient of the 2012 Edgar Award from the Mystery Writers of America; it was also named one of the Best Books of 2012 by Amazon.com and Slate. World of Trouble, the third in the Last Policeman Trilogy, comes out in July of 2014.

Ben’s other books Literally Disturbed (Price Stern Sloan), a book of scary poems for kids; the New York Times bestselling parody novel Sense and Sensibility and Sea Monsters (Quirk) and a novel for young readers, The Secret Life of Ms. Finkleman (HarperCollins), which was a Bank Street Best Children’s Book of 2011 as well as an Edgar Nominee in the juvenile category. In the summer of 2014 he will publish the final book in the Last Policeman trilogy.

Ben has also written extensively for the theater, and was a 2009-2010 Fellow of the Dramatists Guild; his plays for young audiences include The Midnight Ride of Paul Revere , A (Tooth) Fairy Tale and Uncle Pirate, and his plays for not-young audiences include the 2008 Off-Broadway musical Slut and the “jukebox musical” Breaking Up Is Hard to Do, which is produced frequently across the country and around the world.  Ben’s journalism has appeared in The Chicago Reader, The Nation, In These Times, USA Today, the Huffington Post, and lots of other places.

Ben grew up in suburban Maryland, went to college at Washington University in St. Louis, and has subsequently lived in six different cities—seven if you count Brooklyn twice for two different times. Presently he lives in Indianapolis, Indiana, with his wife Diana, a law professor, and their three children.