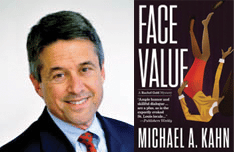 What puts a chill up your spine? Murder? Financial deception? Toiling at a big law firm?

Kahn, of counsel at Capes, Sokol, Goodman & Sarachan in St. Louis, has been writing the Rachel Gold mystery series for more than two decades. “Face Value” is the ninth installment. The title refers to the novel’s intriguing premise: What if you could catch a killer by reading facial expressions, down to the smallest tells?

The thing is, as this story sets out, there’s no apparent evidence that there even is a killer. A big-firm associate named Sari — a former law clerk for our protagonist Rachel — falls from the eighth floor of a downtown St. Louis parking garage, and her death is ruled a suicide. The mystery comes in after the memorial service, when a co-worker tells Rachel he believes Sari was murdered.

The co-worker, a mailroom employee named Stanley, isn’t relying on mere instinct. Stanley has Asperger’s, and while socially challenged, he’s a genius who has taught himself to read emotions by analyzing minute facial expressions. He’s convinced Sari wasn’t depressed, just agitated, and wouldn’t have jumped.

Rachel, Stanley and others embark on a quiet investigation to figure out who at the law firm has something to hide. This involves the creation of an elaborate video tribute to the victim, requiring recorded interviews of seemingly everyone at the firm so their reactions can be put under Stanley’s mental microscope.

The execution of this project gives Kahn the opportunity to paint some unflattering but amusing peripheral characters. Take for instance, the introduction of the unfortunately named Dick Neeler, a firm partner/marketing flack:

Neeler was, in short, the perfect tool for getting the law firm’s higher-ups to approve the Sari Bashir tribute video proposal. Better yet, he was sufficiently clueless to serve as the figurehead for the project without ever suspecting any ulterior motive.

“This is super,” Neeler said. “A beautiful homage to her and, frankly, a terrific opportunity for the firm. … This really hits a home run with our diversity goals, too. A tribute for an Arab associate. Like, wowie wow wow, eh?”

“She was an American citizen,” I said.

“Sure, but she was also Muslim. Allah and all that nutty stuff. It works.”

The whole video tribute thing feels a little far-fetched — surely this would require a prohibitive amount of money and effort — but it’s a convenient plot device that lets the story get on with the face analyzing.

This story is less of a thriller than a personality assessment exercise. There are few scenes that are truly tense or harrowing, although the story builds to its climax in typical mystery-novel fashion and doesn’t disappoint.

We don’t get much of the recently widowed Rachel’s personal life in this installment. There are a few scenes of her interacting with her young son and her mother, but Kahn seems to forgo deeper character development in favor of keeping the mystery plot moving. This makes for a quickly paced story but not much in the way of emotional connection.

Missourians, especially attorneys, should enjoy Kahn’s depictions of places and people, and anyone who’s spent time in St. Louis will appreciate the use of real-life settings — Washington University, Soldiers’ Memorial, the Women’s Exchange, and the Bellerive and St. Louis country clubs, to name just a few.

If you haven’t read Kahn’s previous novels, it’s not a problem to jump into the series at this point. There are references to previous happenings — for instance, Rachel and longtime pal Benny reminisce about the bizarre case of Graham Marshall, which longtime readers will remember from the first book in the series — but those slide into the current story without need of background knowledge.