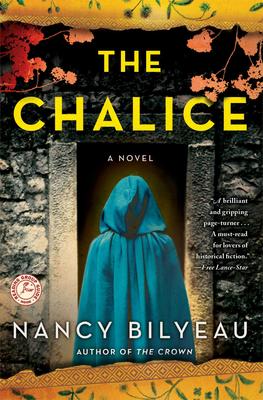 Bilyeau’s first book, The Crown, brought us the determined but naÃ¯ve Joanna Stafford, Dominican nun and daughter of a disgraced aristocratic family, during Henry VIII’s reign. InThe Chalice Henry’s dissolution of the monasteries has sent a more experienced but no less stubborn Joanna out into the secular world where she’s trying to build a quiet life as a weaver of tapestries. A mysterious prophecy and those who would like to use it to further their power and political desires drag her unwittingly into a bizarre plot against the king and his plans to undermine “the true faith” in England. The most powerful people in England once again tug and pull at Joanna, alternately threatening her life (and those she loves) and courting her as an essential element to their plans. Joanna’s devotion to the Catholic Church and her abhorrence of Henry’s destruction of the cloistered life make her willing to participate to a certain extent—a dangerous vulnerability as it turns out—but she becomes entangled in acts that she never anticipated and that violate her deepest beliefs. Faith, its value, and the willingness of supposedly true believers to exploit faith for their own ends, become intriguing, multi-faceted themes in this book. Bilyeau continues from her first book the subtle, complex development of Joanna’s character and combines that with a fast-paced, unexpected plot to hold the reader’s interest on every page. From mystical prophets to court intrigue to the challenges of romance and love amidst those who had once sworn themselves to chastity, The Chalice is writ large across England and the Continent as history and supernatural mysticism combine in this compelling thriller.

This review first appeared in The Historical Novels Review Issue 64 May 2013.
For other reviews, information about Judith Starkston’s novel, Hand of Fire, set during the Trojan War, as well as background history articles on ancient women, food, and daily life, go to JudithStarkston.com Judith can be followed on Facebook and Twitter